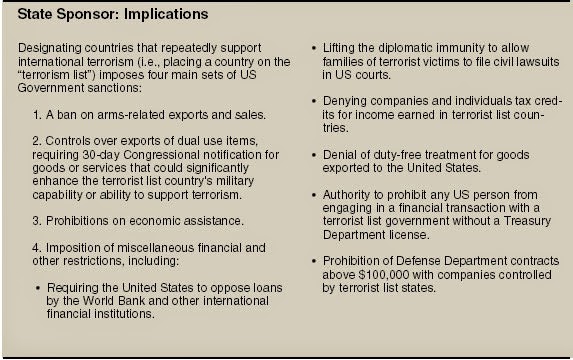 The rumor that President Obama is considering removing the Republic of Cuba from the US list of State Sponsors of Terrorism is disturbing, because if it occurs, American businesses that arrive in a future, unsanctioned Cuba would be at risk of unwittingly conducting business with SDGTs and SDNs who use Cuba as a friendly port. This is more likely than you think. There are valid reasons that Cuba is a designated state sponsor, and we should remember why we named it in the first place.

Although there has always been a reluctance on the part of the US Government to discuss it, the open presence of a number of OFAC-sanctioned global terrorist organizations in Havana has been a fact of life for many years. Meetings between representatives of these sanctioned groups were facilitated by the Castro regime, which welcomed terrorists who may have had arrest warrants outstanding against them, or who were at risk for detention by American, or Colombian, military units.

Cuba offers a safe haven available nowhere else in the Western Hemisphere, save Isla Margarita in Venezuela, which was the other regular meeting-place during Chavez' reign. Whether it continues to be an illicit venue is not known, but the Maduro government maintains close ties to most SDGTs.

If you were wondering why terrorist groups would meet together, consider what they do: traffic in narcotics, purchase & sell arms and ammunition, pass counterfeit money, sell bogus liquor or pharmaceuticals, and sundry other fundraising pursuits. Criminal organizations often barter, sell and exchange illicit goods amongst themselves, hence the need to hook up periodically.

Who are you apt to find with an office, and living quarters, in Havana ? You already know that the FARC and the ELN have permanent offices there, as they are engaged in the never-ending peace negotiations with the Republic of Colombia, but they only represent the tip of the terrorist iceberg. Terrorist groups known to have agents and representatives moving into and through Cuba, from time to time, include:

Why is this a threat to legitimate American companies who dive into Cuban Commerce ?

(A) It would not be difficult for any of the above sanctioned groups to form a corporation or NGO, in Cuba, or the Caribbean tax havens, with front-men, and engage in business with American corporations, to provide material financial support to their headquarters in the Middle East, or obtain goods and services for their operations.

(B) Most members of terrorist groups have been issued valid Venezuelan passports, and Cédulas, national identity cards, with Spanish names. How can you protect from unknowingly conducting business with a terrorist there ?

(C) In their zeal to open new lines of business, it is feared that American companies will give short shrift to Customer Identification Procedures, due diligence, and other compliance functions. It will all take a back seat to new commerce, and even if you wanted to conduct proper CIP, there is no acceptable commercial off-the-shelf resource available to assist you.

In a nutshell, that is why I oppose the plan to fast-track the delisting of Cuba, as a designated State Sponsor of terrorism. It has been disclosed that Cuba will be required to affirm that it will no longer assist terrorist organizations, but that does not bind the terrorists.
Posted by Kenneth Rijock at Tuesday, April 07, 2015