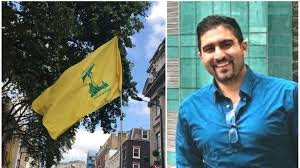 The Hezbollah "Sleeper Agent" Ali Kourani, who lived in the United States, and obtained two university degrees while becoming an American citizen, while conducting espionage and weapons procurement activities for Hezbollah's overseas branch, the Islamic Jihad organization, was sentenced to forty (40) years in Federal Prison for his illegal acts, by a US District Judge in New York.

Kourani, born in Lebanon, and who has previously been the subject of a story on this blog, (May 17, 2019) detailing his crimes and conviction, was also sentenced to five years of Supervised Release, and ordered deported after completion of his sentence. The US Attorney had requested a sentence of 110 years, the Guidelines sentence which is not mandatory for the Court, was reportedly thirty years.

Kourani, who conducted surveillance of American law enforcement and military sites, including 26 Federal Plaza in NYC, and who traveled to China to obtain precursor chemicals for explosives, was trained by Hezbollah in Lebanon. He is believed to be the first Hezbollah agent convicted  in the US for performing covert surveillance of American targets, and transmitting the intelligence, including images, in digital form, back to Hezbollah in Lebanon, in a traditional espionage role.
Posted by Kenneth Rijock at Wednesday, December 04, 2019