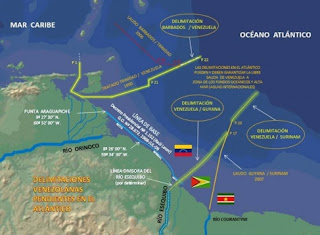 The Government of the Cooperative Republic of Guyana has asserted that Venezuelan has deployed a large contingent of its military to the border between the two nations, raising the risk that President Nicolas Maduro, suffering from a failed domestic economy, and a falling approval rating, will seek to divert attention by using force take Guyanese territory Venezuela is now claiming, notwithstanding a century-old treaty. The offshore territory claimed would, if conceded by Guyana, effective render it landlocked, as the small remaining national territorial waters would be surrounded by those of Venezuela, and neighboring Surinam.

Whether or not Venezuela believes that the the United States and the European Union will ignore such action, and limit themselves to diplomatic protests, as occurred when Russia invaded Crimea, Country Risk for Venezuela, as elevated as it is presently, will climb off the charts if a cross-border invasion ensues. In that event, widespread US and EU sanctions should be expected. OFAC sanctions would block the repayment of outstanding bank debt, as well as accounts receivable owed to clients and bank customers.

Therefore, immediate action, by US & EU banks, to limit their financial exposure to Venezuelan clients, as well as corporate entities based there, would constitute a prudent response at this time. Though reasonable expectations are that military action will not occur, the leadership in Venezuela has been irrational in the past, and should not be trusted to act rationally. 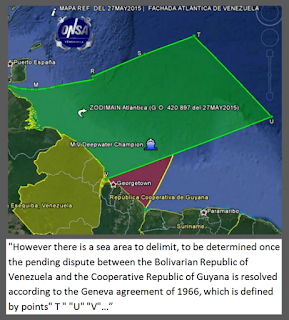