NGO REVEALS THAT ARREST WARRANTS WERE ISSUED AGAINST PILATUS BANK DIRECTORS, BUT CORRUPT MALTESE GOVERNMENT WILL NOT ARREST THEM 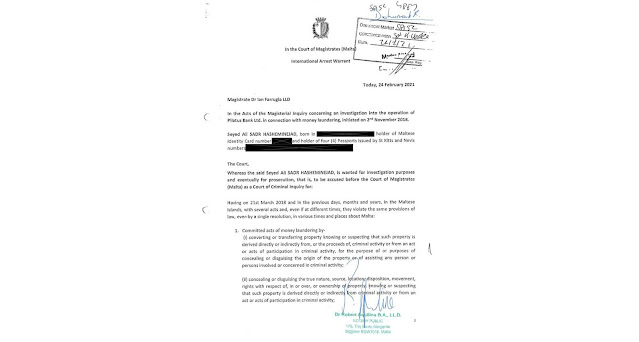 Repubblika, the most active anti-corruption NGO in the Republic of Malta, has released copies of International and European Arrest Warrants for money laundering and other crimes, issued by a magistrate judge in February 2021, but never executed by the country's corrupt Attorney General and local Malta Police. The president of Repubblika, Robert Aquilina, actually laid copies of the arrest warrants at the unofficial memorial to investigative journalist, Daphne Caruana Galizia, as a public show of the organization's solidarity with her anti-corruption and anti-crime campaign against the ruling Labour Party; Daphne linked the government to Pilatus' owner. Ali Sadr Hashemi Nejad, an Iranian national using a St Kitts Citizenship by Investment passport, who is one of the individuals named own the arrest warrants.

Pilatus, whose bank charter was revoked by the European Central Bank for its role in money laundering and financial crime, has been closely linked to Malta's disgraced former Prime Minister, Joseph Muscat, who has reportedly ordered that the rogue bank's senior officials will not be arrested or charged in Malta. Muscat, though no longer in high office, continues to direct the affairs of Malta from the shadows. He did allow a minor compliance officer and the bank itself, to be charged, but not any of the senior officials named today.

The individuals against whom arrest warrants were issued, and which are outstanding and unexecuted and unserved are:

ALI SADR HASHEMI NEJAD, owner and chairman of the Board of Directors

What effect this news will have upon not only the European Union and European Central Bank, but upon  the possibility of that sanctions will be imposed by American regulatory agencies, such as OFAC and FinCEN, is not known, but it could result in a major increase in the calculation of Country Risk at the world's international banks, and closure of the few remaining correspondent relationships, both direct and even those that are indirect, employed by Maltese Financial institutions. Compliance officers should govern themselves accordingly.