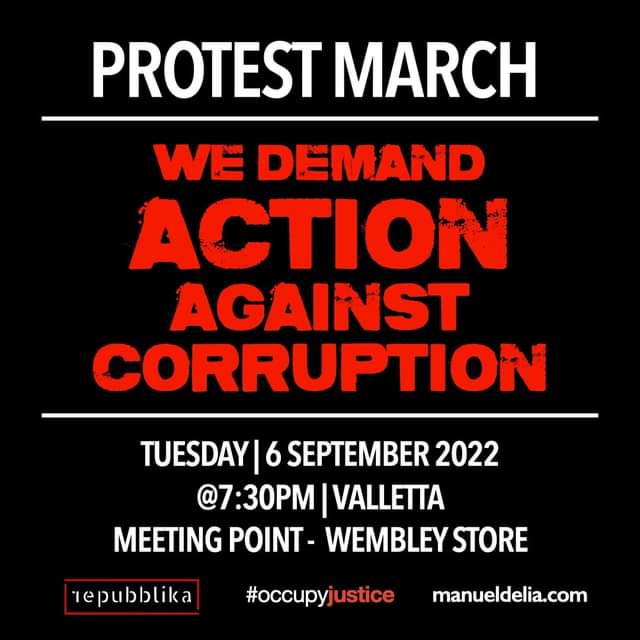 Tomorrow, September 6, 2022, a National Protest March against Corruption will take place in the Republic of Malta, whose government has refused to arrest prominent members of the ruling Labour Party, in connection with rampant corruption and money laundering in the Pilatus Bank and Electrogas scandals. Public sentiment against the government exploded this week, after the disclosure of a secret agreement with a government-controlled company in Azerbaijan  which was extremely favourable to that corporation, and allegedly resulted in massive bribes and kickbacks to senor Maltese officials, and major financial exposure by Malta.

Sponsored by the social activist NGOs REPUBBLIKA and OCCUPY JUSTICE, and manueldelia.com, the protest march, arriving at the Great Siege Square, at  which time there will be a live reading of a Magistrate's order requiring law enforcement to make arrests in the case of money laundering, in the hundreds of millions of US Dollars, by Pilatus Bank, which have never occurred.

These two scandals, which have resulted in compliance officers at international banks, especially in the European Union, to regard financial transactions with Maltese financial institutions and companies as high-risk, and increase Country Risk accordingly, have permanently stained Malta's reputation in the view of the EU and EC, and resulted in high-risk designation by the United Kingdom. Unless genuine reform takes place, Malta could face additional international sanctions, especially by the United States, specifically OFAC. and punitive actions by the European Union.