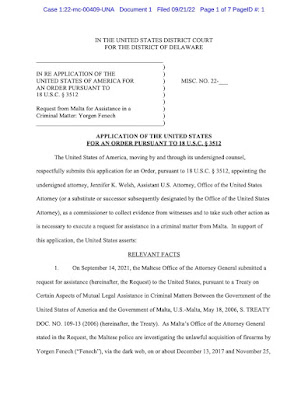 The Attorney General of the Republic of Malta has filed a Mutual Assistance Treaty Request with the United States, for financial information regarding efforts to use Bitcoin in the Dark Web to illegally purchase firearms, allegedly for wealthy Maltese businessman Yorgen Fenech, who is a defendant in the assassination of investigative reporter Daphne Caruana Galizia. The case, In Re Application of the United States, is subtitled Request from Malta for Assistance in a Criminal Matter: Yorgen Fenech,  Case No: 1-22-mc-00409-UNA ( D. Del.)

The case against Fenech, who has been in custody since 2019, is a complex criminal proceeding that resulted in the resignation of Malta's previous Prime Minister, Joseph Muscat, who is considered to be a primary suspect in the conspiracy, which silenced the country's most effective anti-corruption whistleblower through the employment of a car bomb. Galizia died violently in 2017 when her automobile exploded outside her home.

The case, filed in US District Court in Delaware, for an order commanding two crypto currency companies to disclose their records, involving an order from Maltese attorney Aron Mifsud Bonnici, who has appeared numerous time as Konrad Mizzi's attorney, and has been linked to Malta's Labour Party. Bonnici allegedly accessed crypto exchanges Coinbase and Poloniex, in connection with the transactions, according to court documents.