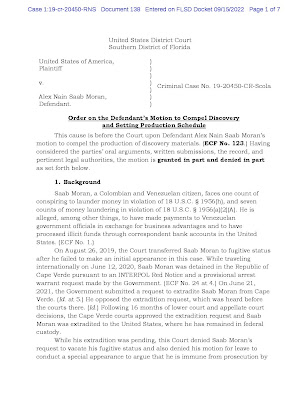 The Court in in the Alex Saab Moran Miami Federal money laundering case has denied the defendant's demand for any Brady material in the hands of a number of government agencies outside the DOJ, relevant to Moran's criminal investigation, reasoning that State, Defense, Treasury and others were not involved in the investigation which resulted in his indictment. The Court did hold that, in the event that these agencies collaborated with DOJ to obtain Saab's indictment, as actually part of the prosecution team, then that material must be produced.

Here are the relevant parts of the ruling:

"Saab Moran’s indictment charges him with money laundering and conspiracy to commit money laundering. Nothing in the record suggests that the Department of State and OIA were involved in the underlying investigation leading to those charges. The same is true of the NSD, the Department of Treasury, the Department of Defense, CIA, and the U.S. Coast Guard. Although the Department of Defense and U.S. Coast Guard may been involved in undertakings to protect Saab Moran in Cape Verde while his extradition was pending (see Esper Extract 21), the Government affirms that none of these four entities was involved in the investigation leading to his indictment. (See Opp. 21-22.) Even more, the Court is not convinced that the prosecutors in this case had “any authority” over these four entities. See Meros, 886 F.2d at 1309. Accordingly, the Court denies Saab Moran’s requests with respect to the Departments of Defense, State, and Treasury, the OIA, the NSD, and—to the extent asserted—the CIA and U.S. Coast Guard.

Nevertheless, upon the Government’s admission that the following entities formed part of its Case 1:19-cr-20450-RNS Document 138 Entered on FLSD Docket 09/15/2022 Page 6 of 7 “prosecution team,” the Court grants Saab Moran’s requests as to the DEA, FBI, HSI, and ICE. The Court’s ruling applies to the extent these organizations and/or their subparts collaborated with the prosecutors in this case to procure Saab Moran’s indictment. It does not apply to material reflecting efforts made by these organizations and/or their subparts to procure Saab Moran’s extradition."  (Order at 3).