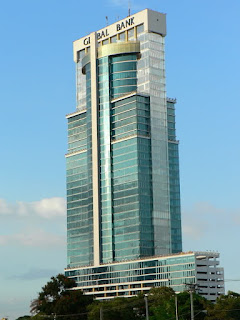 This may be a good time to expose an underground aspect of Panama's banking structure. Above you is a photograph of the Global Bank Tower, located on Calle 50, in downtown Panama City. While the building's name obviously tells you who the key tenant is, there are other banks whose names, curiously, do not appear on the building list in the lobby. Do you wonder why that is so ?

I have identified the offices of two "closed door" banks at this address; one is a major international Swiss bank,  UBS, whose name you are familiar with. The other is one of Canada's biggest banks, Royal Bank of Canada.Neither office is open to the public; they turn in any walk-in visitors, who may venture in without an appointment. One must pas security scrutiny in the lobby to gain admittance. There are no names emblazoned on the office doors; only a low-key logo tells clients that they are in the right place, and not some anonymous Panamanian financial services firm.

They are not agencies, branches, or official rep offices of any kind, nor do they appear on any official SBP list of licensed financial institutions, of any type or designation. I know, because I have checked. Individuals who have been in these nonpublic offices have told me that banking business is indeed regularly conducted there for clients.

So why is everything hidden ? No licenses means that these "closed" facilities pay no taxes, nor licensing fees, to the Government of Panama. exactly how are they permitted to remain open ? While there is no ready answer, one should remember that Panama is one of the most corrupt countries in Latin America, along with Venezuela and Haiti. have illicit payments changed hands ? We cannot say.

Whether there are other international banks operating under the radar in Panama City is not known, but where there's smoke, there's frequently fire. I know that, if I am a compliance officer at a bank located in North America, or the countries of the European Union, I would be seriously concerned about the possibility that there are others, with a covert footprint in one of the world's most notorious centers for money laundering activity, and govern myself accordingly, when seeing transactions involving stops in Panama, for banks that otherwise have no branches there.