DMG REOPENS IN COLOMBIA: WAS MURCIA A SAINT OR SINNER ? OR BOTH ? 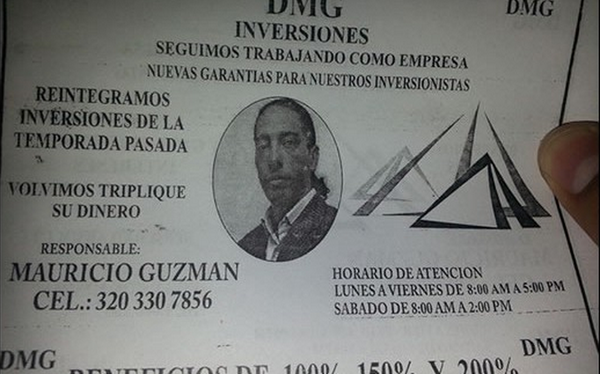 Notwithstanding that his DMG pyramid/Ponzi scheme ultimately defrauded victims out of billions of dollars, and that David Eduardo Helmut Murcia Guzmán was convicted, in two countries, many Colombians still revere him. His image still commands respect. In fact, his reputation is so strong that a man claiming to be his cousin, Mauricio Guzmán, has reopened for business, using his likeness. Colombians who purchased DMG cards were able to make major purchases at seriously discounted prices during DMGs reign, and there was even talk of him running for president of Colombia, had he not been arrested in Panama, and ultimately convicted in the United States.

Operating out of the Colombian city of Neiva, which is south of Bogotá, and east of Cali, as DMG Inversiones, Mauricio is promising that he can triple your money. He is also offering investments paying, 100, 150, and even 200%, and it is guaranteed, according to the handout. Details of how he intends to accomplish this have not been disclosed.

This is not the first time successors sought to trade upon David Murcia's fabled reputation; here is an image of an updated DMG $100 bill that was being distributed around Colombia a year ago, by individuals who sought to use his name. 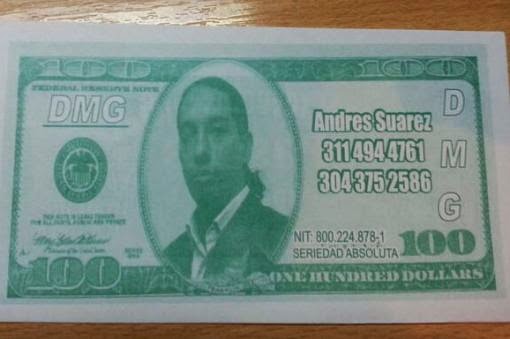 Considering that somewhere between three and four billion dollars were reportedly lost by DMG clients, and most of them were Colombians, some of whom cleaned out their savings accounts to participate in the investment program, I am amazed that Mauricio Guzmán has not already been tarred and feathered by his cousin's victims. Perhaps the reason is that many know that Murcia's subsequent business failure is said to have occurred, not because it was a pyramid scheme, but due to the criminal actions of Panama's powerful Syrian organized crime ring, many of whom were working with Murcia to invest his funds into Panama real estate, and who coveted his vast wealth, and took steps to illegally acquire it all.

According to sources of proven reliability, the Syrian crime group engineered Murcia's arrest, and seizure of his assets. It then prevailed upon the corrupt Supreme Court of Panama Justice Moncada Luna to dismiss all charges, and immediately order Murcia deported to his native Colombia. Thereafter, all of Murcia's holdings and physical assets, most of which was owned by corporations with bearer shares, were appropriated by members of the organized crime group.

Ricardo Martinelli, and his sons, were later seen driving around Panama City in his collection of luxury automobiles; Gary James Lundgren then took possession, and title, to several upscale condominiums purchased by Murcia, as well as a large amount of bulk cash. Murcia had purchased, and paid in full for, a fleet of twenty luxury yachts, from a prominent Panama yacht broker, who only delivered three, but later retained all the money from the others. The three yachts actually delivered were later auctioned off by the Government of Panama, but the proceeds from those sales was never accounted for.

Panama's biggest mystery remains the location of all that bulk cash, literally billions of dollars, smuggled in from Colombia via speedboat. We know that some of it was employed to make large purchases of Petaquilla Mining Ltd. stock, in the insider trading scandal, but where is the rest of that "flight capital?" The whereabouts of David Murcia himself is unknown; he should still be serving his American sentence, but he is not in the custody of the Bureau of Prisons, according to its records. is he now cooperating, and will he testify against the former Panama business associates who stole from him, in a new case in the United States ?

Whether you believe, like many Colombians, that David Murcia helped them, or whether you consider him a white-collar criminal, the details surrounding the loss of his assets in Panama to its Syrian organized crime elements is a fact. The question is whether any law enforcement agency, Panamanian or American, is willing to seize those properties, and do battle with a powerful adversary.