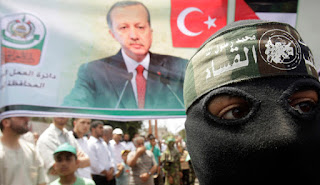 Buried in an article by a reliable Middle East expert are the names of the senior Hamas leadership currently working from their base in Turkey. These individuals are believed to be supervising the building of Hamas cells in Judea & Samaria (The West Bank), and send money, weapons, and agents, in the territory for the sole purpose of forming small terrorist units, to carry out attacks on unarmed civilian targets in Israel. They have been allowed to maintain their safe harbor within Turkey, by the present government of the country, which considers them allies.

Some of these individuals are known to have acquired Turkish passports; their names may have modified, but compliance officers at international banks that have a substantial Middle Eastern clientele should be alert for them. Check the place of birth on all Turkish passports; was the holder born in Israel, or the Territories, or anywhere else outside of Turkey ? If so, you may have a terrorist, pretending that he is a Turk.

The Hamas leaders in Turkey are below; They are all terrorists, with murder of unarmed civilians, kidnapping, or other crimes of violence on their records. Many were expelled from Israel, in a prisoner exchange.

(1) Bakri Hanifa, a terrorist financier said to have moved funds from Qatar to Turkey. He formerly operated in the Hamas headquarters in Syria.