IS ARGENTINA'S EX-SPYMASTER HIDING OUT IN MIAMI ? 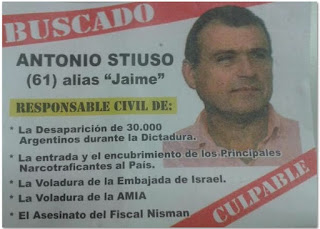 The Government of Argentina is seeking the former head of the Intelligence Secretariat (SI), the country's hybrid intelligence service, Antonio Stiuso, a/k/a Jaime, and has reportedly sought the assistance of the Government of the United States in locating and apprehending him. Some sources claim that Stiuso is living anonymously in Miami.

The SI, which seems to discharge the functions of both an intelligence agency, like the CIA, and a signals intelligence agency, like the NSA or GCHQ, was involved in the ongoing investigation into the AMIA bombing, reportedly conducted by agents of the Government of Iran. Stiuso's personal involvement, with Alberto Nisman, the government investigator, with his finding of a link between Iran, who allegedly sponsored terrorist acts in Argentina, and the President of that country, may have resulted in bogus charges being filed against him, causing him to flee.