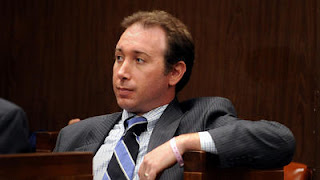 Michael Szafranski, the investment adviser who was supposed to perform independent verification upon Scott Rothstein's bogus sexual harassment and employee discrimination cases, but who took illegal fees from Rothstein, and failed to conduct the most elementary due diligence, to protect his clients, was sentenced this week to 2 1/2 years in Federal Prison. Szafranski, who entered a guilty plea to a single court, violated his duty to his clients, when he knew that some sort of fraud was involved, and facilitated investments, though he may not have been aware of the exact details of the billion dollar Ponzi scheme.

It is believed that Szafranski's willingness to testify against a former senior officer at TD Bank led to that individual's change of plea, and for that reason, his sentence was relatively short, due to his substantial assistance. Some of the victims may consider his sentence to be inadequate, but he did disgorge the profits he made, for his participation in the fraud.
Posted by Kenneth Rijock at Tuesday, October 27, 2015