If compliance officers at international banks don't have enough problems conducting enhanced due diligence investigations on all new customers who hold St. Kitts & Nevis and St. Vincent & the Grenadines passports, due to the problem economic passport programs operated by those island nations, now the Prime Minister of St. Lucia has announced that his nation will begin accepting applications for its own new Citizenship by Investment program. While official statements indicate that the St. Lucia program will be conducted with all due care, in screening the applicants, to insure that no "unqualified" individuals are accepted, the other programs operated by Caribbean countries have approved known criminals, individuals from sanctioned countries, and other high-risk applicants who should not qualify under any circumstances.

While it may seem inappropriate, prior to the actual opening of the St. Lucia Citizenship by Investment program, to regard it as a problem, the deficiencies in customer identification, as well as what can only be described as willful ignorance by program officers, and compliance staff, leave us no choice in any risk-based compliance program. We are all aware of the scandals of the recent past.

You can be assured that career criminals, as well as they money laundering advisers, are well aware of the upcoming St. Lucia program, and will seek to crash it, using well-documented front men, to obtain that prized passport from a Commonwealth of Nations jurisdiction. After December 31, you should regard any and all individuals presenting passports from St. Lucia as candidates for enhanced due diligence investigation. This includes diplomatic & official passports as well, for we must not forget the case of the individual who showed up in Canada, with a purchased St. Kitts passport, demanding to see the Prime Minister. 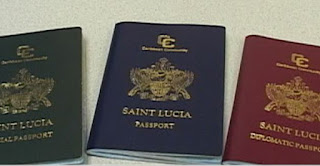