Although it was not covered by North American media, the Latin American press recently focused upon a disturbing event: When the leader of the FARC recently traveled to Havana, to continue the ongoing peace talks with the Government of Colombia, his route, and mode of travel, demonstrated that the Maduro regime in Venezuela is a staunch ally of the global terrorist organization. You may not like to read this, but it is the truth. A computer seized by Colombian armed forces in a raid revealed a $300m payment, made by Venezuela, directly to the FARC.

The FARC leader, Ramón Rodríguez Chacín, alias Timochenko, first traveled out of Colombia, and into Venezuela, where he boarded a Beechcraft 1900 aircraft, owned by PDVSA, Venezuela's national oil monopoly, near the frontier, in an a restricted military area.You can clearly see the PDVSA logo and color scheme on the aircraft.

During his flight to Havana, Chacín was escorted by two Venezuelan Air Force Sukhoi 30 fighter jets. If you are wondering why he was protected by military aircraft, it is because he has been accused of supervising the manufacturing and shipment of tons of cocaine into North America. There is a $5m reward, offered by the United States, for any information leading to his capture. Considering that much of that cocaine transits Venezuela, en route the US & Canada, and senior members of the Government of Venezuela share in the profits, it is not surprising that Venezuela desires to protect Chacín, who has been accused of ordering torture, murder, kidnapping, and several other war crimes.

Why did the North American media ignore this story ? Perhaps because the FARC is not the hot topic that it is in Latin America, where issues of inequality and rigid class structure are far more severe than in the United States & Canada. In any event, there is a non-public aspect to this story which should concern those who live north of the Rio Grande; the reported probe of North American airspace by Venezuela.

According to reliable sources, who are former senior officers in the US Air Force, those two Su-30 Venezuelan fighter jets, which are manufactured by Russia, intruded into the North American Air Defense Identification Zone (ADIZ), which is airspace close enough to the continental United States to be regarded as a potential national security threat. Unknown aircraft entering the ADIZ must be immediately identified, to rule them out as a military or terrorist threat. 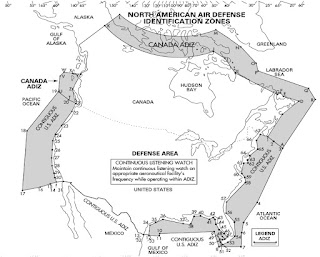 That is what occurred, according to my sources, who stated that four US military aircraft were scrambled to meet a potential threat. Given that the ADIZ begins a distance north of Cuba, what were the Venezuelan fighters, who were allegedly serving as escorts to the FARC leader, doing north of Havana ?  Considering that both Russia and China have recently sent aircraft to test American response time, in a number of locations, the question persists: Was Venezuela testing the US, to see what the military reaction time was to ADIZ intrusions south of Florida, and was this operation carried out for the benefit of Russian intelligence agencies ? Perhaps President Maduro can enlighten us.