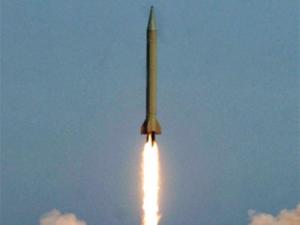 Iran & Syria are not the only nations sending missiles and rockets to Hezbollah in Lebanon, according to a reliable source in Panama, who has been monitoring them. How does the regime happen to have them, you ask ? That question requires some background information.

Iran has been shipping arms and weapons, including Shabab 3 missiles, to Venezuela for several years, though most Western Hemisphere governments would prefer that this tidbit not become public knowledge, because there might be a call to remove them. The close relationship between Iran's rulers, and the late Hugo Chavez, Venezuela's former dictator, resulted in multiple deliveries of missiles, ostensibly for defense against a feared American invasion, but in truth and in fact, as a stockpile of arms for the future.

The Government of Venezuela, and Hezbollah, have maintained a close relationship for years, and there is a large contingent of Hezbollah agents working inside Venezuela. When Shi'ite Lebanese civilians needed cash to rebuild the homes that were damaged or destroyed during the Second Lebanon War, it was Venezuela that shipped US Dollars into Syria, using civilian business jets. the money was later transported, via surface routes, into Hezbollah-controlled areas of eastern Lebanon, and there after handed out, publicly, to civilians. Most people assumed that it was an Iranian project, and again, those in the US Government that knew about the true origins of the cash, did not release it to the media, so that Venezuela's role as a supporter of terrorism remained out of the limelight.

There are regular shipments of civilian goods, from Venezuelan ports, to Beirut, and hiding arms within those freighters, some of which are registered in Lebanon, is most likely a continuing operation. Whether this information will raise your Country Risk levels on Venezuela, is your decision, but you should consider the Bolivarian Republic a state sponsor of terrorism.
Posted by Kenneth Rijock at Thursday, December 08, 2016