PANAMA FAILS TO COOPERATE WITH BRAZIL IN ODEBRECHT CORRUPTION SCANDAL

Brazilian authorities are complaining that the Government of Panama has failed to reply to eight requests for documents, which are critical in their investigation of money laundering and corruption, alleged to have been committed by Constructora Norberto Odebrecht SA, the powerful contractor that reportedly paid large bribes to obtain lucrative state contracts in Brazil. Information about Bearer-share Panamanian companies, and payments made through bank accounts at Credicorp Bank, in Panama City, have been sought by the Federal Public Ministry of Brazil, without success. One request was reportedly acted upon, but eight others have been totally ignored.

Panama and Brazil have mutual assistance treaties in force, including a legal aid treaty, and the Panamanian failure to respond, and to produce documents, apparently has no basis in law. The reason that Brazilian requests are being ignored is thought to be Panamanian fears of exposing an additional major scandal, involving bribes paid through accounts at Panama City banks, in the wake of the Panama Papers case, which has severely damaged the republic's reputation as a responsible offshore financial center. 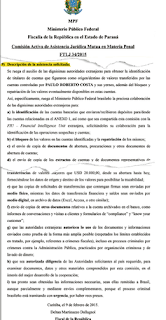