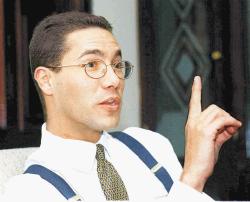 Marc Matthew Harris, the prodigy who earned an MBA and CPA at the age of 20, and became an offshore financial specialist in the Republic of Panama, and later Nicaragua, as the Harris Organization, has been released from Federal Prison, after serving a long sentence, for money laundering and tax evasion. He allegedly laundered the proceeds of three drug traffickers, and defrauded dodgy clients who were seeking to hide money offshore, as well as legitimate investors.

His offshore operations were long considered a Ponzi scheme by investigators who sought to expose his unregulated investment schemes. Harris, who renounced his American citizenship, and became a Panamanian, offered what he called sophisticated legal tax avoidance planning to US taxpayers, and became a target for American law enforcement agencies. Rumor has it that he is now engaged in seeking out certain individuals who helped themselves to some of his millions, when he was deported to the US, to face money laundering charges.