The US Attorney's Office in Miami (SDFL) has filed a Superseding Incitement in the money laundering and narcotics trafficking case involving former BVI leader ANDREW FAHIE and two other defendants, who were the targets of a sting operation by US law enforcement, and agreed to facilitate the movement of narcotics through the British Virgin Islands, and be well compensated for their roles in this criminal activity.

The new indictment, adds two counts to the case; Interstate and Foreign Travel in Aid of Racketeering. Count Four is against Andrew Fahie; Count Five on the same grounds is against co-defendant OLEANVINE PICKERING MAYNARD, who was also at the time of the alleged crime an officer in the BVI Government. The new charges appear at the end of this article.

Given that rumours have widely circulated to the effect that Fahie was, from the very beginning of the case, seeking to negotiate a plea agreement whereby he would mitigate his exposure by giving evidence against other Caribbean leaders who are engaged in facilitating narcotics smuggling into the Continental United States, but no such agreement has yet been filed, it appears that the Department of Justice has raised the stakes by adding a RICO count. Has he been delaying the conclusion of the entire matter unnecessarily, and these new charges are simply a Government tactic to move the case along? He does have a reputation for arrogance; did it backfire?

Racketeering alleges an unlawful business enterprise, which is more than a single violation. We trust that Mr. Fahie has taken due note that his exposure has not only increased the possible sentence that he will receive after conviction, it potentially sends a negative message to the judge and jury about repeated criminal conduct. His delay to promptly negotiate a deal have now exposed him further, and weakened his position. We shall be monitoring the case to see if he now executes a plea agreement. 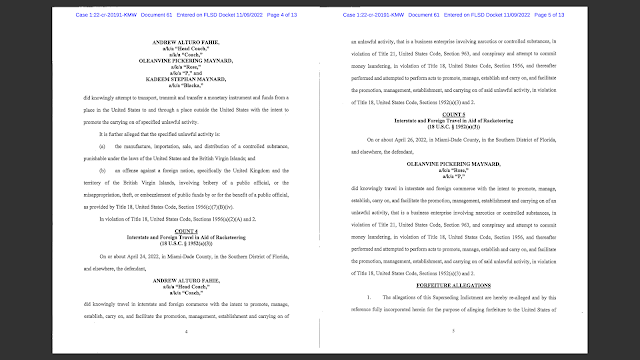