WHY DID AMERICA IGNORE THE TERRORIST LIVING IN VENEZUELA ? 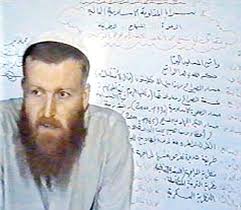 His name is Mustafa Setmariam Nasar*, and he is the member of Al-Qaeda who is believed to have been the intellectual author of the Madrid Train Bombings,** after which he used his Spanish passport*** to flee to Venezuela. Upon arrival, he was met by an official escort, who served as his bodyguards during the approximate year that he spent openly living in the country. The question is: since the US knew he was there, why did it not apprehend him, using special operations forces ?

Nasar, a prominent jihadist ideologue and author, who lived for a time in the United Kingdom, was in 2004 named to the FBI Most Wanted List, with a $5m reward for his capture. Whilst he was living in Venezuela, he visited the Caracas mosque regularly, and spent time on Venezuela's Isla Margarita, home to a large contingent of Venezuelans of Arab descent, and the preferred venue of agents of a number of designated global terrorist organisations, both of the Middle East, and Colombia.

This individual, who was clearly the most important terrorist target in the Western Hemisphere in 2004 and 2005, was known to US law enforcement, and his activities monitored, but never taken into custody whilst in Venezuela. Why was he ignored ? I doubt that there were reservations about violating Venezuelan territorial sovereignty, in light of the Global War on Terrorism.

The opportunity passed when he returned to the Middle East. In 2005, there was an single report that he had later been captured in Pakistan, by local forces, and thereafter turned over to the United States. No official confirmation was ever issued by the US, but his $5m reward was quietly deleted on government websites.

It is rumoured that he spent a number of years in custody at the American military base in Diego Garcia, that part of the British Indian Ocean Territory which is leased from the UK. The trail goes cold after that. Dead or alive, or still in custody ? We cannot say, but the Spanish Government officially enquired, to the US, about his whereabouts, in 2009. He has never been brought to justice for a terrorist act that claimed almost 200 Spanish citizens.