We have previously reported on the criminal activities of the thrice-convicted fraudster, and child molester, Ralph Innochina Sanders a/k/a Shawn Sanders, Raphael S., Sean Sanders, Sean Black, Ralph Overseas 6'6" Sanders, Jerry Cartwhite, and Jerry Cartright; his modus operandi is to defraud naive women out of their money, and destroy their good credit rating. Our goal is to alert the public, particularly naive women, explaining how this predator operates, and how to avoid becoming a victim. He has preyed upon customers at several automobile dealerships in Northern California as a salesperson.

It appears Sanders’ most recent victim has turned up the heat on the dangerous criminal, con artist and fraudster who scammed her out of thousands of dollars, and duped her into co-signing for the Maserati depicted in the photo below. He fled to Southern California to hide the vehicle from repossess agents, while landing a used car salesperson job at Mcpeaks Jeep Dodge Chrysler in Anaheim CA, with intent to continue with his fraudulent actives on potential customers. 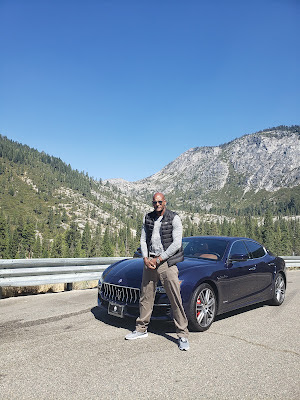 Most of his female victims' complaints to law enforcement, of being defrauded, are similar. He projects an image of being wealthy, by showing off a rental property address in the affluent community of El Dorado Hills, which he and his Middle School teacher wife cannot really afford. From there, the victim is either scammed to cosign a loan for a luxury vehicle, or to use her credit card for a cash withdrawal; sometimes, they are duped into investing their money into shady deals, which Sanders has no intention of ever paying back.

Although current California Law prohibits him from holding the required California occupational license,  Stewart Benjamin of McPeaks Jeep Dodge Chrysler in Anaheim CA and his management team have placed profits over their customers' safety. They have completely ignored the criminal history of dangerous Career Criminal Ralph Sanders, a person who is a registered child molester known to steal customers personal information to defraud them. Could Steward Benjamin himself be a victim of Ralph Sanders deception, or is he a willing participant covering up for this dangerous criminal? Ralph Sanders has been twice previously denied a Vehicle Sales License, pursuant to California Vehicle Code §11806, due to his extensive criminal history. He is a three-time convicted felon and scam artist, 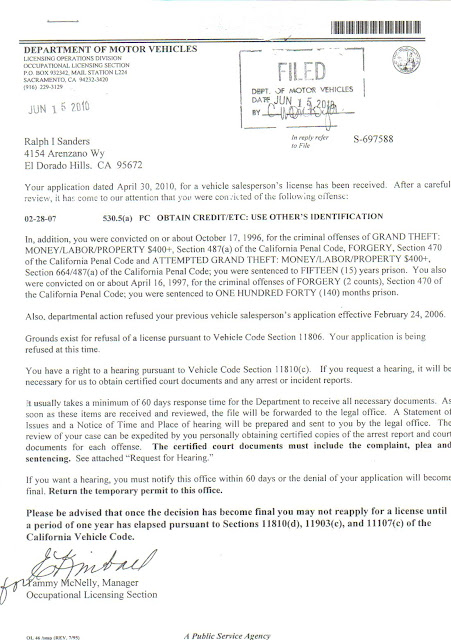 Pursuant to California Department of Motor Vehicles (DMV) Vehicle Code Section 11800-11824, the Occupational Licensing Division requires that all vehicle salespersons must be employed by a dealer, as defined in Section 285, and anyone who, under any form of contract, agreement, or arrangement with a dealer, for commission, money, profit or other thing of value, sells, exchanges, buys, or offers for sale, negotiates, or attempts to negotiate, a sale or exchange of an interest in a vehicle, is required to be registered under this code. See https://law.justia.com/codes/california/2005/veh/11800-11824.html

It shall be unlawful for any person to act as a vehicle salesperson without having first procured a license or temporary permit, issued by the Department. When that license or temporary permit issued by the Department has been cancelled, suspended, or invalidated, or has expired, the State of California, via the Occupational Licensing Division, also requires a live scan fingerprint, which is then fed into the California Department of Justice (DOJ) criminal database, and the FBI NCIC database. The State of California's Occupational Licensing Division has strict laws prohibiting the hiring of convicted felons, particularly individuals like Sanders, who has been convicted three times of theft, forgery, and other financial crimes, as they cannot be allowed access to potential customers' personal and financial information.

Security experts and financial crime professionals are questioning whether McPeeks Jeep Dodge Chrysler management was reckless in hiring an individual with convictions for major financial crimes as a salesperson, without subjecting his application to a due diligence investigation. The lack of a complete in-depth background investigation on Sanders may have negligently compromised the personal and financial information of many customers.

A number of Sander’s victims have reported to California DMV Investigations, that Sanders, or persons at McPeeks Jeep Dodge of Anaheim, are utilizing the dealership’s subscription to gain access to his present and potential victims Drivers Licenses or Identification cards. He then copied the photo on the victims' identification information to make false documents, or post their actual photos on websites to harass intimidate and defame them.

Additionally, Federal and State Information Security and Data Breach Notification laws require mandatory reporting of information. McPeeks Jeep Dodge Chrysler has a legal obligation to notify former, potential, and existing clients of the possibility that their personal and financial information may have been compromised.

Any damages sustained by the victims, as the direct and proximate result of this failure to notify them of Sanders' potential data breach would be the responsibility of the dealership. Such gross negligence might also give rise to an award of punitive damages to the victims, in addition to actions by state regulatory agencies against the dealership.

Ralph Sanders continues to carry out his campaign of deception, fraud, forgery, burglary, extortion, intimidation, and threat of bodily harm, to his victims in the State of California. When will California law enforcement and the FBI close down his criminal career?

A Ralph Sanders Victim Strikes a Blow for Justice

Ralph Sanders - Inside the Mind of a Career Criminal