Thanking that it can only happen to someone else, and doing nothing to prepare yourself, or take precautionary measures just in case, makes you the perfect victim that criminals like California's notorious career criminal, convicted child molester and con artist RALPH SANDERS are looking for. The best defense against those types of savvy criminals, who always portray themselves as victims of deranged people, is to be alert and conscious of how cunning they can be, to reach their ends.
Our reporting on Ralph innochina Sanders a/k/a Shawn Sanders, Raphael S., Sean Sanders, Sean Black, Ralph Overseas 6'6" Sanders, Jerry Cartwhite, and Jerry Cartright, his modus operandi is to defraud naive women out of their money, and destroying their good credit rating, is to alert the public, particularly naive women, how this predator operates, and how to avoid becoming a victim.
Most of his female victims' complaints of being defrauded, to law enforcement, are similar. He projects an image of being wealthy, by showing off a rental address in the affluent community of El Dorado Hills, which he and his Middle School teacher wife cannot really afford. From there, the victim is either scammed to cosign a loan for a luxury vehicle, or to use her credit card for a cash withdrawal; sometimes, they are duped into investing their money into shady deals, which Sanders has no intention of ever paying back. 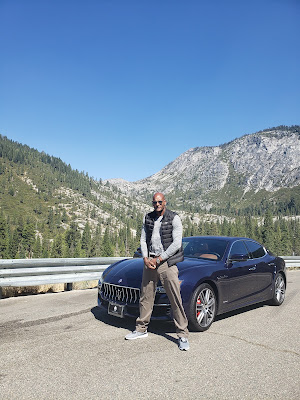 On the surface, Ralph Sanders appears to be an author. The reality is that Ralph Sanders is illiterate, for a person born and raised in an English-speaking country. His English Composition and writing skills do not even measure up to a failing grade in high school. However, in his various frauds, Sanders projects himself to his victims as an educated person with great wealth.
Our continuing investigation into how Sanders runs his criminal racket unabated has revealed that his wife, LAUREN SANDERS, and three female accomplishes frequently write the attack blogs against his helpless victims, hoodwinking the online readers in believing that Ralph Sanders is himself a  victim of some deranged individual. This criminal goes to great length to hide his crimes on the Internet from potential victims by hiring KRISTOPHER JACKSON of REPUTATION RHINO , supposedly ranked #1  https://reputationrhino.com and CHRIS PATTERSON of www.erase.com to deindex all hyperlinks to negative and factual articles published. 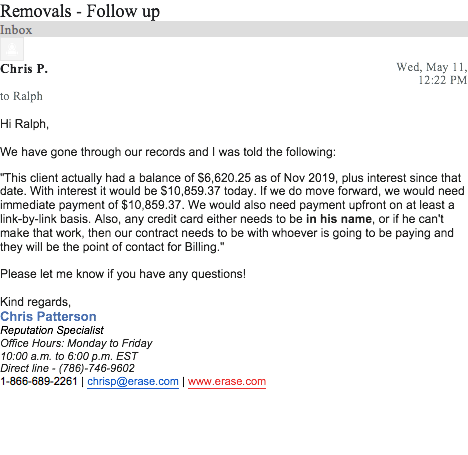 Sanders boasting to some of his crime partners, via his own emails, has now revealed that he is into major debt with both Reputation Rhino and Erase.com, the very same dubious outfits which continue to violate the California Penal Code, Section 32, and 18 United States Code, § 792, Harboring or Concealing Persons, and/or Conceal a Person whom you Know Committed a Crime, a Felony.
These companies, or Internet cowboys, as they are called,  are further victimizing Sanders's victims, in the name of a few dollars, to keep his crimes hidden from the public. Civil lawyers have a clear and convincing case against those Internet hired guns. Ralph Sanders' female accomplices, who are supporting him in his crimes will be profiled in upcoming articles. Stay tuned.