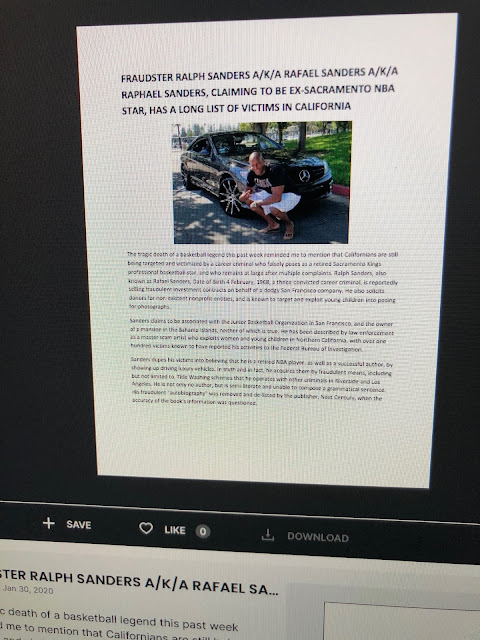 This article has appeared on a number of websites.

This Blog has written several articles exposing the California Career Criminal and master scam artist, RALPH INNACHINA SANDERS, who goes by several aliases* in the State of California, and throughout the US and the Caribbean. we are now learning that, while the FBI Office in Sacramento (Roseville) continues to drag its feet in arresting him, while failing to protect women and senior citizens from this dangerous criminal, that the US Postal Inspector may have found other means of holding Sanders accountable for his ongoing crime spree.

The black Mercedes-Benz depicted in this article has been the subject of actions of its rightful owner and the finance company to recover it from Sanders, who is known to show off the vehicle as a demonstration of his wealth to potential victims. As it turned out, Sanders duped the naive female victim into co-signing for the vehicle, and paying for insurance, while never making a single payment on the promissory note.

The victims filed several police reports, including several telephone calls to the FBI Roseville California office, to no avail. Although the rightful owner/victim has notified the California Department of Motor Vehicles, preventing Sanders from renewing or re-registering the expired vehicle license plates, Sanders continues to drive the subject vehicle, accumulating dozens of moving violations, and toll bridge charges that he crosses, while evading fees. 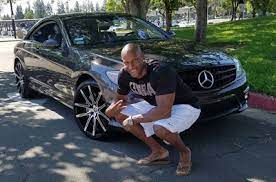 To conceal his ongoing criminal activities, and financial liabilities, from his victim, Sanders filled out a phony change of address form for the victim, resulting in the forwarding of mail from her father's address to an innocent individual's post office box in Folsom, California.

This time around, however, Sanders proved to our readers that he is truly America's Dumbest Criminal, by failing to understand that US Postal Inspectors were able to lift his fingerprints from the unauthorized Change of Address card, and match them with his prints on file in the National Criminal Information Center database.

As the saying goes, Give  a fool enough rope, and he will surely hang himself.

Will Ralph Sanders, California's Public Enemy, if there ever was one fraudster more deserving of that title, now face justice, to prevent him from targeting any additional victims ?  Stay tuned.