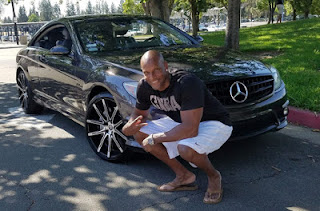 Sanders with a car that he defrauded a victim out of.

While we have covered the career criminal RALPH SANDERS* for years, we regret to report that he is still not yet back in prison, paying for his many crimes. We have heard from a number of his latest victims recently; he typically chooses single women, with whom he creates a bogus personal or business relationship. The end result is always the same; the victim lost money, sometimes also lost their prized motor vehicle, and never received the promised reimbursement of money lent, or a loan they signed, or an automobile they purchased. We have heard the same sad stories, over and over again.

(1) Sanders goes from job to job, generally at automobile dealerships or sales facilities; he doesn't stay long, for as a three-time felon with multiple convictions, including substantial prison time, he cannot qualify for a State of California license to sell automobiles. He often quits early on, and then tries to extort money from his former employer, alleging sexual or some other form of harassment or discrimination, seeking a payday with no factual basis for the claim. 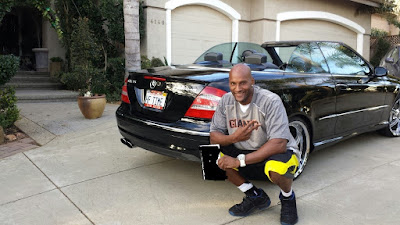 (2) During the time he is employed, Sanders trolls the customers, seeking potential victims whom he can befriend, and subsequently defraud. He often claims that he is awaiting a huge windfall out-of-court settlement, and can the victim du jour please advance him some money, purchase an automobile for him, lend him their automobile, or perform some other act that will enrich him. Of course, the promised payment from a settlement never materializes, because it was simply part of the fraud. It does not exist. 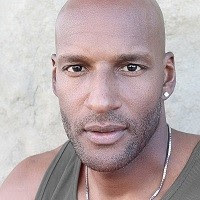 (3) The fact that Sanders has never been arrested at any of these California auto sales facilities leads us to believe that at least some of the dealers are cooperating with him in the fraud, to some extent. Any quick google search of the Internet turns up his extensive criminal record. Why is he able to swiftly find a new position when fleeing his previous one ?

(4) Does Sanders actually have an attorney who is making demands for financial settlements from employers, where there is no factual basis for the claims ? Or is he creating bogus demand letters, purportedly from lawyers, when in truth and in fact they are from Sanders ? In either event,  all the claims are fraudulent.

(5) He also employs cyber-criminals and hackers, to attack anyone who has made his many crimes public. Sanders' hackers have repeatedly tried to compromise our emails, telephone and blog, and attempted to contact us to spread disinformation.

(6) Sanders dupes his victims into believing that the Governor of the State of California granted him a Pardon, which is totally false.

Sanders is a clear and present danger, both to the automotive industry, and to consumers who, in good faith, seek to purchase a car, but end up defrauded, afraid for their personal safety, and losing a substantial amount of money to him. he needs to again be in custody, convicted, and imprisoned, but this time for Life, to incapacitate this career criminal, so he cannot defraud anyone else again.

* Sanders has more aliases than we can count. the most commonly used ones are;

Does fraudster Ralph Sanders have personal information on Chrysler-Jeep Customers ?