RALPH SANDERS - INSIDE THE MIND OF A CAREER CRIMINAL

People who live a life of crime tend to rationalize their own behavior by diverting blame, and questioning the motives of others. For example: If that lady didn't want her purse stolen, she should have been  smart, and locked her car." As part of the rationalization process, the career criminal generally does not evaluate the consequences of his own behavior.

Self-centered, and oblivious to the needs of others, the career criminal lives by the simple motto of " me, me & me." Essentially, these individuals believe that they have the right to commit any act they desire, because life is all about them, all the time. Many habitual offenders suffer from Antisocial Personality Disorder, and what is commonly referred to as Criminal Thinking. A career criminal will very rarely show any remorse for his actions, or empathy towards others. The career criminal's complete failure to adhere to accepted social standards, coupled with a lack of self-control, leads to a life filled with confrontations, and arrest after arrest.


RALPH INNICHINA SANDERS, also known as RAFAEL SANDERS, RAPHAEL SANDERS, SEAN SANDERS, SHAWN SANDERS, SEAN BLACK and RALPH 6'6" OVERSEAS SANDERS, whose inability to control his criminal behavior, means that he is acting upon every impulse, which is a dominating characteristic of every career criminal. His favorite response, when confronted by his victims is "I am a Christian and I will pray for you." 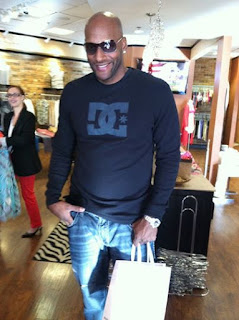 In Sander's sociopathic thinking, he must prevail by any means necessary, against any and all of those victims who choose to exercise their right to speak up for justice, by sending associates, or even himself. to intimidate anyone who dares comes forward to speak up against him and his fraudulent actions. When he claims to be the victim of cyber-bullying, he places the blame at the feet of a single, deranged individual. In truth and in fact, he is guilty of defamatory and slanderous postings against many of his female victims.

This dangerous predator, and pathological liar, is according to his immediate family's statements, a child molester, who comes off as a smooth talker, alleging that he is very wealthy, owns several homes and an automobile dealership, and, using the alias 6'6" Overseas, dupes his victims into believing that he is, not only a former Sacramento Kings NBA star, but a former professional basketball star who played on teams in Europe and Latin America. Sanders once even conned  a mayor and a sports broadcaster into believing that he was the real deal, as they posed for photographs with him. Sanders is ruining the Sacramento Kings public image and brand, as he defrauds his victims with the Kings name.

A search of real estate records in California, Nevada and the Bahamas has failed to find any evidence that he ever owned any of the extensive real estate holdings he brags about to his victims.

While his writings show him to be only semi-literate, and ignorant of access to the Internet, as well as common electronic devices, he has gone to great lengths to engage hackers to attack the work of publications that have exposed his daily scams and felonious activities, including this blogger, whose articles have been subject to unsuccessful Blunt Force attacks.  This career criminal belongs back where he has spent a large portion of his adult  life, in state prison in California, so that he cannot hurt any new victims.