THE PRIME MINISTER'S WIFE AND HER MYSTERIOUS CHARITY 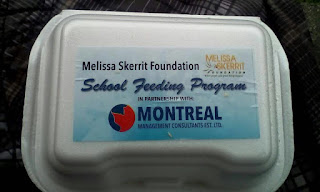 The First Lady of Dominica, Melissa Skerrit, formed a charity late last year; it is known ass the Melissa Skerrit Foundation, and it appears (if you look at the image) to receive some funding from  a Montreal economic passport agent, which also maintain an office in the United Arab Emirates. The sponsor, however, is not the issue; It is the opacity of the Foundation.

Here's my concern: nowhere is there any publicly-available information about the Foundation; where was it formed, where does the bulk of its funding come from, and who the officers and directors are.

Now, ponder these issues, all of which have been brought to my attention of late.

The Foundation maintains no known office, in Dominica, or elsewhere. Considering that it is participating in a school lunch program, this is inconsistent with the normal practice of a non-profit organization, which depends on, not only donations of money, but donations of goods and services. Exactly how is one to contact the foundation ?

I bring this up, because many foundations located in the developing world, especially those formed in tax havens like the the Republic of Panama, have been used to laundering criminal profits, or the proceeds of corrupt activity. May we please see some transparency from the Melissa Skerrit Foundation ? A copy of the Foundation's organizational documents, the names and addresses of officers & directors, and its tax status would be an important first step, in my humble opinion.
Posted by Kenneth Rijock at Friday, May 12, 2017