IS A CHINESE-PHILIPPINE NAVAL ENGAGEMENT INEVITABLE ? 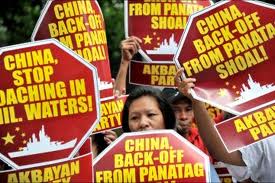 Strong words this week, from one of China's generals, infer that naval combat, between his country and the Philippines, is probable, is extremely disturbing and unsettling for compliance officers who are computing Country Risk, as well as the banks whose clients are involved in ongoing international trade with both nations. PLA Major General Luo Yuan, in discussing the dispute over the Scarborough Shoal (Panayag Shoal), who was referring to a possible naval engagement between China and the Philippines, intimated that such action would be forthcoming. 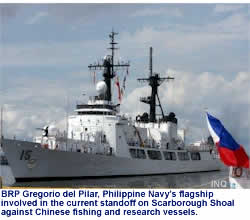 Students of Asian history will recall that, according to China, one of the causes of the Sino-Vietnamese War, of 1979, was Vietnam's continued possession of the Spratley Islands. Though the Scarborough Shoal lies only 124nm. from the Philippines, therefore lying and being within the country's Exclusive Economic Zone (200nm.), China has claimed it, together with all other islands, reefs and shoals in the South China Sea (West Philippine Sea).

Any military actions between the two countries, albeit how minor it be, could have far-reaching consequences for the Philippines. Will it expand into land warfare in the Philippines ? China executed a total "scorched earth" policy when it withdrew from the Vietnamese territory it occupied during the short conflict in 1979, which resulted in high casualties on both sides. Obviously, there are nationalistic elements in China that favour military action, to demonstrate the country's resolve in support of its sovereignty claims over all of the South China Sea. The Philippine military, weakened through years of systemic corruption, and with outdated equipment, is no match for China. 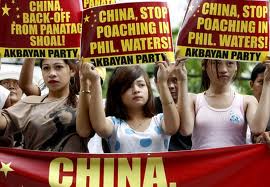 Compliance officers at international financial institutions with business in the Philippines should watch Chinese media closely; if the rhetoric and jingoism increases, you may want to advise management to reduce the bank's exposure.