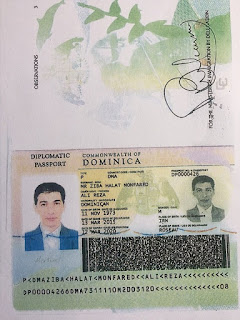 If you have ever read the 1961 Vienna Convention on Diplomatic Relations, you know that all the countries of the world, save one, are signatories to it, including Dominica, and that the United Nations has ratified it, giving it the force of what passes for international law in these troubled times.

Dominica's, pay-to-play diplomatic passport sales scheme, which has allowed international criminals, Politically Exposed Persons (PEPs), and other suspects, to acquire such valuable documents, violates at least a half dozen of the requirements of the Vienna Convention,, and thereby clearly violates international law.

Here are just a few of the numerous blatant violations that one can easily see are occurring:

(1) Only Dominican nationals qualify to become diplomats, with rare, and justified,  exceptions. ALL the sales of diplomatic passports are to foreigners, rendering them invalid, on their face.

(2) Diplomats are to have specific assignments, and missions (called postings) to specific duties. NONE of the rogue Dominican "diplomats" have work assignments, other than a few which have vague and ambiguous titles, none of which  carry with them actual duties.

(3) Diplomats must be accredited to a specific destination, have their credentials presented to a foreign jurisdiction, and be approved & admitted there, for that purpose. Again, this is not a part of what is going on at Dominica's "fire sale" of passports.

(4) Diplomats are assigned by the ministry or agency, of a nation, that is responsible for foreign affairs. These passports are sold directly, and illegally, without any formal interaction, training or selection, based upon experience or merit. Some of purchasers NEVER even come into Dominica.

(5) There is a public list of accredited diplomats. Dominica's Minister of Foreign Affairs arrogantly refuses to name her "diplomats," saying it is a non-public aspect of diplomacy, to enable it to function. That is total nonsense.

The bottom line: if you, as a compliance officer, at an international bank, or a customs agent, at an airport of entry, happen to receive one of these bogus documents, where the owner is not a Dominican by birth, ask the holder for their REAL passport, and confiscate the illegal one; send it to the United Nations, so the international community can see this charade for what it is: an illegal effort to collect fees for an illicit, and prohibited, purpose.
Posted by Kenneth Rijock at Wednesday, May 03, 2017